From the first time the four Wimberley siblings heard the “Foggy Mountain Breakdown” as kids, their mission has been to carry the energetic and honest sounds of bluegrass with them everywhere they go. In 2008, the Wimberley Bluegrass Band made their first official appearance in Oak Glen, the apple country of California.

Since that day, they went on to delight audiences of all ages all over the country with their passionate and distinct approach to bluegrass music. They were named one of Los Angeles’ top five bluegrass bands by CBS-LA, they have played in Nashville, TN, Las Vegas, NV, they made multiple appearances at the Huck Finn Jubilee, Winter NAMM, and even headlined the Big Bear Bluegrass Festival twice.

They have traveled up and down the state with multi-award winning guitarist Dennis Agajanian, appearing with Greg Laurie and Franklin Graham. In February 2015, their song “Hard Working Man” was featured in an episode of ABC’s nationally broadcasted sitcom “The Middle”, and the same year, Danielle and James were featured playing mandolins in a nationally-aired commercial for KFC featuring Darrell Hammond.

The siblings have been very involved at Chapman University, from which they all graduated with various majors; they hosted a popular campus radio show (Wimberley Bluegrass Hour, 4 semesters), performed in the nationally televised Christmas program, performed Carol Barnett’s The World Beloved: A Bluegrass Mass with the university choir, and shared the story of bluegrass music at TEDxChapmanU. In May 2016, the siblings gained international attention as all four of them graduated from Chapman University with bachelor’s degrees at the same time!

The Wimberley Bluegrass Band continues to bring their sensational high energy to stages all across the country, carefully weaving the perfect mixture of original music, traditional bluegrass fare, and oft remembered tunes thoughtfully re-crafted in the bluegrass genre.  From the moment they take the stage, the tight family harmony and lightning quick picking breathes renewed life into the timeless old sounds of the fathers of bluegrass music. Walking the road between tradition and innovation, the Wimberley Bluegrass Band holds high the torch of the tradition of good old fashioned bluegrass music. 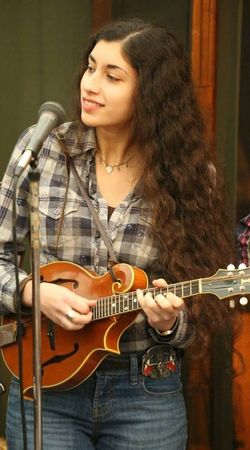 Danielle plays mandolin and is a Weber Instruments endorsing artist.

She is the eldest of the Wimberley siblings and is the only girl among them. Her powerful mandolin chops are drawn from the inspiration of Bill Monroe and Ricky Skaggs, her favorite mandolin stylists. Danielle provides the high harmony vocals, and often is requested to sing lead on some of her favorite tunes.  She is the resident clawhammer expert of the siblings.

Fun Fact: She earned her black belt in Shorin Ryu Karate with her brothers in 2007. 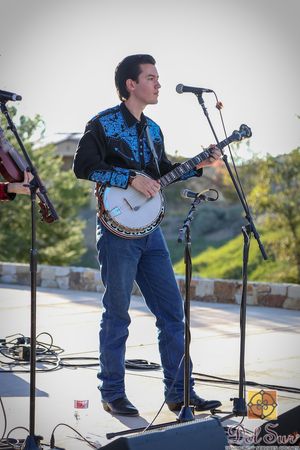 James plays banjo and is a Deering Banjos endorsing artist.

James is the oldest brother, second oldest of the siblings. While all the Wimberley siblings love the banjo, James proved most adept as he learned from listening to banjo pioneers like Terry Baucom, Earl Scruggs, and Jim Mills. James offers lower harmony to the sibling quartet.

He also plays resonator guitar with the band and is a Beard Guitars endorsing artist.

Fun Fact: James can be seen with Danielle, right behind Darrell Hammond in the famous Colonel Sanders Mandolin Band commercial. They also provided the mandolin music behind his jingle. Read about it here. 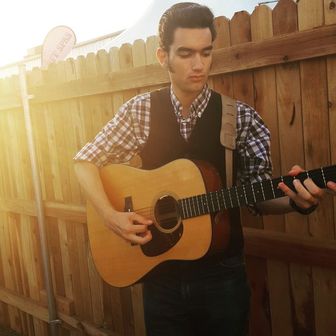 Mark plays a Boucher guitar and is a Black Diamond Strings and L.R. Baggs endorsing artist.

Mark is James' twin brother. He stands on the other side of the stage, completing the "Bluegrass Bookends" image with rhythm guitar and assorted harmony vocals. Mark's songwriting has added fan favorites as "This Chevy Truck and Me", "A Few Miles Down the Road", and "The Lost Will Find Redemption in the Lord".

Fun Fact: He was Dr. Ralph Stanley's artist liaison for his last appearance at the Huck Finn Jubilee. 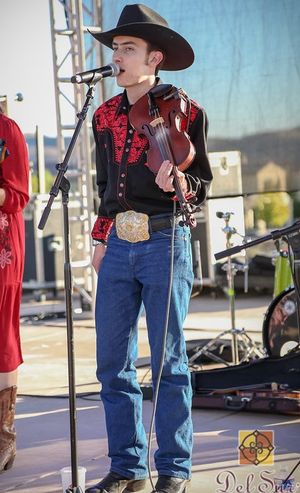 Michael is an award-winning fiddle player who is an L.R. Baggs endorsing artist.

Michael is the youngest sibling, and lead singer for the group. His favorite fiddlers are Bobby Hicks, Andy Leftwich, and Vassar Clements.  Michael has proven to be a prolific songwriter, providing over half of the band's original music, including favorites like "East Texas Rain", "Magnolia Creek Home" and co-writing "Saddleback Hill" with Mark, just to name a few.

Fun Fact: Michael is the youngest to ever graduate from Chapman University, earning his Bachelor's in Strategic and Corporate Communication at the age of 17 years old.